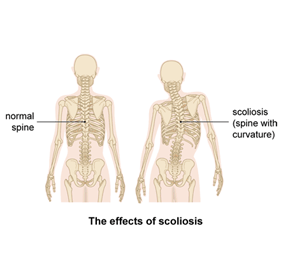 Poor posture has a direct effect on our health and well being. Research shows that up to 90 per cent of people suffer from poor posture…

with the top five posture sins comprising: slouching, forward pelvis, rotated hips, forward head position and rounded shoulders (commonly recognized as dowager’s hump). Each of these postures puts extra pressure on the spine and can lead to a host of debilitating problems from tension and soreness to headache, back pain and fatigue. More importantly poor posture also influences our nervous system significantly impacting how a person operates day to day, having an adverse effect on their well-being, overall mood and ability to concentrate, study effectively or even work.

Scoliosis: Scoliosis is a lateral curvature of the spine. If the curvature is larger than 10 degrees, it is called scoliosis. Curves less than 10 degrees are often just postural changes. Scoliosis can also be accompanied by lordosis (abnormal curvature toward the front) or kyphosis (abnormal curvature toward the back). In most cases, the vertebrae are also rotated. For patients with back pain along with the scoliosis, manipulation and exercise may be of help. Most people with scoliosis lead normal, happy, and productive lives. Physical activity including exercise is generally well-tolerated and should be encouraged in most cases.